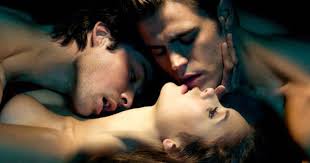 One of the traits that determines happiness and mental health is flexibility: the capacity for creativity, abstract thinking, and adapting to changing circumstances. When it comes to the sex lives of swingers, there’s no question that they are more flexible in their approach to sex than their monogamous peers. But the real question is more complex: Is flexibility toward sex a good thing or a bad thing?

As a therapist who specializes in relationship issues, I can tell you that I have seen scores of men and women over the years who have varied sexual lifestyles and appetites. I’ve worked with couples who swing and couples who wouldn’t dare, and one distinguishing characteristic I have found is that couples who swing have less fear than monogamous couples. What’s more, they cheat less.

In terms of the fear, monogamous couples often fall into the toxic jealousytrap, afraid that a particular behavior or gesture might lead to a full-fledged affair and the end of the relationship. Monogamous couples also often fear that their best days are behind them, that they lost the opportunity for sexual excitement in favor of settling down and getting married. On the other hand, swinging couples are often deeply in love and emotionally connected, but they don’t value sex in the same way their monogamous peers do.

When it comes down to the nitty-gritty, the dividing line is about the values a given couple holds toward sex. In my clinical work, I find that monogamous couples are often judgmental about a sex life that is anything other than monogamous, while swinging couples often espouse more of a live-and-let-live attitude. In other words, they’re often less judgmental of couples who choose to live a monogamous lifestyle. Is one better? No, because people are different, with different emotional and sexual needs. It makes perfect sense, for example, that someone who isn’t very sexual in the first place wouldn’t care to have a more liberal sex life: they already don’t have much interest in sex to begin with!

Where problems arise in monogamous relationships is when one or both members of a couple have a sexual appetite that the relationship isn’t able to satiate. What happens? Couples who are monogamous often stray and seek sex outside of the relationship. The hypocritical part is that many cheaters would never agree to a swinging relationship!

It’s never a therapist’s job to tell a client what kind of lifestyle to live as long as the client isn’t causing harm to himself or anyone else. Even listening to a man tell me about having an affair, it would be out of line for me to tell him to stop it. I would, however, encourage him to tell his wife and come clean about his deceptive behavior. But when it comes to the type of relationship he seeks, it’s not a therapist’s job to prescribe a set of values a client should have and hold onto.

One consideration that any couple should take relates to safety: physical safety if you’re having sex with people you don’t know, and sexual safety to the point that you make sure to always practice safe sex. A flexible approach to sex is one thing; putting yourself in serious jeopardy is, of course, another.

Ultimately, infidelity is a rampant problem in relationships because men and women are often too afraid to be honest with themselves about what they want, and terrified to make the changes in their relationship that they secretly crave. I’m not suggesting that most monogamous couples secretly want to swing. I am, however, suggesting that men and women often judge those who swing but could actually learn something about themselves and human nature if they take a moment to reflect on the reasons why others—swingers, included—choose a different lifestyle.

Feel free to check out my book, Overcome Relationship Repetition Syndrome and Find the Love You Deserve, about how to stop repeating the same bad patterns in your relationships over and over again.

Seth Meyers, Psy.D., is a clinical psychologist with the L.A. County Department of Mental Health.